By: Rana Attia and Isabelle Ouyang
In: Arts & Style 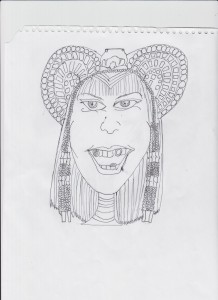 Katy Perry’s most recent music video for the pop hit “Dark Horse” recently stirred up controversy for its Memphis-Egypt and Memphis-Tennessee crossover theme. The video, in Perry’s trademark colorful and extravagant style, melds Egyptian mythology with sexualized and modern elements. A pyramid made of twinkles, for example, makes a brief cameo appearance.

Perry’s melding of contemporary and historical is visually interesting, but verges on mockery. In the original music video, Perry even burns up a pendant with the word “Allah,” the Arabic word for God on it (she removed the scene after complaints arose, but never issued a public apology). Complaints have arisen about the awkwardly superficial portrayal of “Katy-Patra” (a reference to the famous pharaoh Cleopatra). And the video seems to exploit Egyptian mythology purely for a “quirky” and “exotic” effect (we get it; Urban Outfitter’s targeted demographic thinks they worship cats just as much as ancient Egyptians) rather than an express of genuine appreciation for the culture.

Some Egyptologists tentatively approve of the accurate symbology and references to Egyptian culture.  In a Time Magazine article titled “There’s a Very Good Reason Why Katy Perry’s ‘Dark Horse’ Video Is Set in Ancient Egypt,”  the director of the music video, Mathew Cullen, warned against the dangers of appropriating modern cultures, and stated that ancient Egyptian culture has become part of what he calls our “shared collective mythology.”

So what’s the big deal? Why does it matter if Katy Perry and many other celebrities are influenced by the cultures of others? While there are many controversial aspects concerning this topic, one of the main ideas is that when cultures are taken out of context as a trend and then treated as an accessory, the social identities of minorities are being invalidated. It contributes to the idea that culture can be defined as something as simple as an article of clothing, or appearance.

Let’s talk real-life application. Southeast Asian culture has long been the inspiration for the creative endeavors of non-Southeast Asians: Perry’s wedding with Russell Brand, teen pop queen Gomez’ “Come & Get It” music video, Lambert’s turban in the 2013 “1001 Arabian Nights” themed Life Ball- all the way back to the Byrd’s sitar-influenced “Why” guitar solo circa 1965. Yet, according to an article in the Huffington Post, the first Indian American Miss America, Nina Davuluri, was met with outraged tweets claiming a “Muslim,” “Arab” and “terrorist” could not win an American pageant despite the fact that Davuluri is none of those things (on another note, since when do the first two immediately equate to unAmerican?).

The narrow-mindedness of pop culture needs to be addressed. With young Americans eagerly devouring tabloids that portray culture as a costume rather than an an identity, they see a mask without a face behind it that’s theirs for the taking.