By: Rana Attia
In: Features 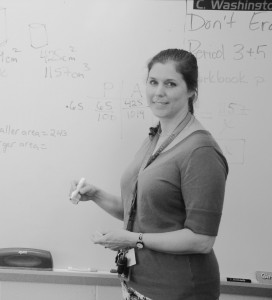 Geometry teacher Leslie Barnhart leads a life full of variation both inside and outside of her workplace of Marshall.

Most students know her as the teacher with the quirky Harry Potter-themed classroom, but the mother of two is also a pianist and an author. Titled The Christian’s Guide to Harry Potter, Barnhart’s book analyzes the religious symbolism in the acclaimed book series Harry Potter.

Though Barnhart is currently an avid fan of the book series, that wasn’t always the case. In fact, according to Barnhart, she used to be an “anti-Harry Potter person.”

“I was a piano teacher when the book were coming out, and many of my students were using the hexes and jinxes in the book to be mean to other kids,” Barnhart said. “I didn’t want my own children to have anything to do with a book that encouraged such behaviors.”

As a learning experience, Barnhart took her son to the first movie so they could see for themselves. She then ended up reading the seven book series in ten days.

While Barnhart teaches high school math, she was extremely well-rounded as a kid. Not only did she play piano, but she was also an active swimmer and soccer goalie, eventually graduating high school as the salutatorian at the early age of 16.

“I had never dreamed I would ever be a teacher,” Barnhart said.

Instead, Barnhart aspired to be a doctor. After she discovered that she couldn’t deal with needles, a change of plans ensued. It was then that Barnhart decided that she wanted to go back to high school, but this time as a math teacher.

“My favorite thing about teaching students is [that] they always have great things to say or other viewpoints that start great conversations, even if they aren’t all about math,” Barnhart said.

Barnhart is the sponsor of the Harry Potter club, and tries to incorporate Harry Potter themes into her lessons so that the lessons are fun and easier to understand.

“I’d like to think that the students have responded well to the Harry Potter theme,” Barnhart said. “I try not to make it take over the classroom, but they like to compete, they like the house parties, and they really do pull together as teams that help each other learn the material.”

Though Barnhart has multiple ventures outside of the classroom, such as writing, piano and visual arts (her current project is reviving Greek mosaic art), she stays devoted to her trade: ”I know there are higher-paying jobs out there, but I love working with teenagers and helping them solve problems, so for me, I can’t imagine anything better!”