By: Isabelle Ouyang
In: News 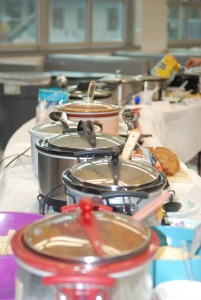 It’s not what you typically see on teacher workdays. There is a lot of bustling about; counselors sprinkle in last-minute handfuls of cheese, while teachers unload tubs of guacamole and sour cream. Someone is slicing a loaf of bread, and later, Principal Jeff Litz’s 10-year-old son wheels in a cart topped with cakes. There are still people carefully setting down slow cookers with placecards like “Taco Bello’s Taco Chili” and “Everything But the Kitchen Sink Chili.”

One of these judges was Chef Devlin (top right), who explained his intricate judging process as follows: “Are you happy and do you not have a problem paying for it?”

“It has to look good,” Devlin said. “If it looks good, you’re already thinking, ‘This is gonna be good.’”