In One Week: How to ride a bike

By: Isabelle Ouyang
In: Features
Tagged: bike, in one week 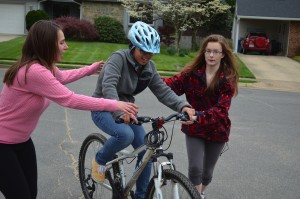 At eighteen, now in my final year of high school, I’ve found myself with no real applicable life skills. Sure, I’ve taken a personal finance class, but I couldn’t say with 100 percent certainty what a W-2 form is (or why it’s really necessary). I can’t cook, I can’t swim, I’m still kind of scared of talking to cashiers and until this week, I couldn’t even ride a bike.

Whether it was due to my extremely sheltered childhood or my natural aversion to trying new things, I decided it was time for a change. Or at least, the Rank & File staff did. In one week, my editorial board (and friends) would help me reach a childhood milestone, several months into legal adulthood.

Day one was difficult for everyone involved. Anna and Camille took me to practice in a parking lot—and carried most of the weight as I tried to get the hang of the intricate pedal work. In fact, the first couple of days were more of a struggle for them than for me. I would barely get a start before swerving and toppling to one side.

Teaching isn’t so easy when what you’re teaching is instinctive. Both Anna and Camille would take turns on the bike in order to figure out what exactly wasn’t clicking for me. “I don’t know what to tell you,” Anna would say as she kicked her legs over the seat. “It just comes naturally to us.”

It takes a village (and a hill)

On the fourth day, the crowd of onlookers grew. It took not two, but four people to figure out that I was leaning too far back into my seat and not getting enough propulsion from my bottom foot. The real teacher, though, was necessity, which presented itself when my friends dropped me from the top of a hill to fend for myself.

The hill wasn’t particularly steep, and I had two people to catch me at either side, but the fear of falling really put things into perspective (even though it didn’t really stop me from steering headfirst into some limbs). And once I got the hang of it, biking wasn’t so hard after all. In fact, it was kind of freeing.


I’m not saying I’m convinced that I’m invincible, but now that I can finally ride a bike, I’m no longer as afraid as I was of diving headfirst into new experiences. Even though I was a bit of a late bloomer, I was able to learn with a little help from my friends. Now I just need to learn how to drive.