By: Staff Editorial
In: Opinion 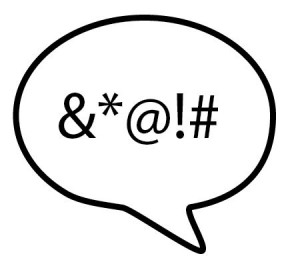 High school and college kids are particularly famous for dropping the f-bomb and other curse words on a frequent basis. If you listen closely to the murmur in the halls between class periods, you’re sure to catch an obscenity here or there. Even teachers curse sometimes during class when emphasizing a point or expressing frustration. While cursing has become more acceptable since the start of the millennium, some conservative critics unjustly cite that profanity soils reputations and challenges social etiquette.

But first, let’s go all the way back to the beginning. All this bad connotation around cursing originates from an old and classist past. In 1066, the French-speaking monarchy took over England in the Norman Conquest, which revolutionized the English language. All of a sudden, the Saxon ruling class of England became the lower working class as the French monarchy gained power. This meant that the English language (coincidentally where most of the world’s curse words originate from) was considered for the uneducated, as the Saxon’s took on farming jobs instead of their previous higher level merchant jobs.

Onto 1950’s television. Back in the day, the word “pregnant” was considered too explicit to say on television, because the media had not yet become a platform for expletives. Instead, networks would use phrases like “she’s expecting” instead, in order to not corrupt the youth. Just think of the children!

Similarly, in the 1970’s the Federal Communications Commission, per the request of a lot of offended families, enacted a “family viewing hour.” From 7:00pm to 8:00pm eastern time, which was considered the prime-time slot, all television networks were under the responsibility to air only family-friendly shows or movies. While this act was repealed in the late 70’s, this illustrated our culture’s intolerance for dirty language.

But oh how the times have changed. In the 21st century just scroll through any given rap album and you’ll see the little red “explicit” flag next to every song, notifying you to expect some foul language. The New York Times found that the use of the word “b*tch” has tripled in T.V. in the last decade, growing to 1,277 uses on 685 shows in 2007.

With all this outside influence, combined with some parental influence, cursing has become normalized. It’s no wonder teens are doing it more. The aforementioned critics, particularly leading in scholar cursing in America (which I didn’t know was a possible area to become a scholar in) Timothy Jay, estimates teenagers curse anywhere from 80 to 90 times per day.

P.M. Forni, another critic of cursing and author of “Choosing Civility: The 25 Rules of Considerate Conduct,” disagrees and rationalizes teenage cursing as, “…the inability to articulate.” She continues to state that, “the profanities are the fillers. They take the place of a more sophisticated way of speaking,” suggesting that teenagers are opting for a more dumbed down version of speech.

However, researchers Cory R. Scherer and Brad J. Sagarin at Northern Illinois University conducted a study in 2006 that proved cursing had no effect on the perception or level of intelligence. Three groups of people were shown three different videos of the same speech, one without any curse words, one with a curse word at the beginning, and one with a curse work at the end. Results found that the viewers actually responded more positively towards the videos with cursing, citing that they felt those speeches conveyed more passion.

Another overdone argument from adults is that cursing, for girls specifically, is bad because it is not “attractive.” In a typical sexist fashion, this argument is suggesting girls should not raise their voices in anger if they feel frustrated because of the way they might be perceived, which would effect their Ultimate Pursuit of a Man. Heck, that argument alone makes me wanna use my finely tuned potty-mouth.

However, this isn’t the case anymore; cursing is for all socioeconomic levels and genders. Professors, politicians and students alike use profanity regularly. Now, I am by no means saying that teenagers should let out strings of profanities at teachers or use them in essays, as basic respect for elders and academia is still important. The point is that using foul language is in no way a measure for personal intelligence, just as talking like a California valley-girl doesn’t equate to a dumb blonde (we’ve all seen Legally Blonde, right?)

Maybe teenagers use obscenity to mark our transition to adulthood or maybe it’s our inner rebellious teenager, but either way, it has no effect on intelligence and should not at all affect how people perceive us.

Today marks the 29th annual International Day of Persons with Disabilities, and what began as a yearly observance first celebrated by the United Nations in 1992 has made its way into the classrooms of George C. Marshall High School.
https://www.gcmnews.net/2021/12/03/community-preaches-acceptance-to-mark-the-international-day-of-peoples-with-disabilities/

Flags fly at half-staff outside to honor the late Gen. Colin Powell, former Secretary of State and Chairman of the Joint Chiefs of Staff. Powell died yesterday due to complications with COVID-19.