As Homecoming weeks wraps up, the learn spirit games are rising in intensity.

Today, all classes competed outside in the Stadium field. The first game was the relay; teams consisted of two boys and two girls from each class. Juniors won first place, followed by sophomores, seniors took third and freshmen placed last.

The second game was a water balloon toss. These teams also consisted of two boys and two girls from each class. Teams were out of the competition if they dropped their water balloon, regardless of whether it burst or not. Freshmen were out first, juniors and sophomores lost in the same round and seniors were victorious.

The learn games closed with practice rounds of cheering for this afternoon’s pep rally. 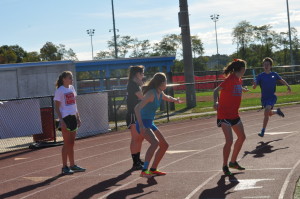