By: Patrick McCabe
In: Entertainment 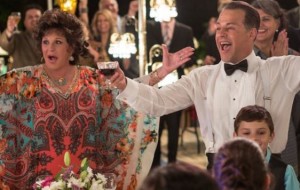 When it comes to sequels, few emotions are more useful for drawing in large audiences than nostalgia. While the most successful sequels often take three to four years to follow up their original movies, My Big Fat Greek Wedding 2 took a much longer 14 year break, significantly amplifying the nostalgia by doing so.

Although it is doubtful that teenagers remember when the first My Big Fat Greek Wedding came out in 2002, for anyone who has seen the classic family comedy since then, being reintroduced to the Portokalos family successfully ignites its intended sense of nostalgia.

Beyond this nostalgia, however, My Big Fat Greek Wedding 2 has little more to offer.

While the original movie found widespread success through its Romeo and Juliet-esque storyline in which the main character, Toula, falls in love with a non-Greek man who her family disapproves of, the sequel instead uses a complex array of storylines with no definite main character to follow.

The lack of a clear protagonist did have the interesting effect of creating a much stronger sense of family in the movie as no one character dominated the action. However, the movie likely would have been more successful at captivating the audience’s interest if there had been at least a loose protagonist for them to rally behind.

The original was also able to make non-Greek audience members feel included in the plot as they watched Toula’s non-Greek partner, Ian, attempt to adjust to the hectic yet culturally rich lifestyle of the Portokalos. This outsider dynamic is noticeably absent in the sequel as the story instead focuses of the Portokalos family in general and their interactions with non-Greeks in Chicago, who almost always appear to be shocked and overwhelmed by the family’s Greek culture.

The jokes are funny and the several romantic storylines are well developed, but it is not clear that My Big Fat Greek Wedding necessarily needed a sequel 14 years after its original success.

If you have not seen the original My Big Fat Greek Wedding I highly recommend that you watch the classic movie that gives a comedic look into the life of a Greek-American family. However, unless you feel a strong nostalgic pull, there is little new to gain from watching the sequel.