By: Jay Kosumi
In: Sports

The varsity football team welcomed their new coach, Jason Strickland, in the cafeteria after school on Apr. 11. Strickland will oversee the team as the replacement of George Masten, who stepped down after four years due to family reasons.
“I just want to keep rolling the program that coach Masten and the staff have already started here,” Strickland said. “I’m in the process of speaking with various coaches, trying to figure out how we can all come together and keep this thing rolling.”
Strickland has been a coach for 15 years. He acted as the head football coach for seven seasons at Eastern High in Washington D.C., but his coaching career started with basketball and baseball in North Carolina. Strickland said he feels very excited about working with a new program and new players
“Usually when something new comes around, it gives you a sense of excitement,” Strickland said. “Coming here, I see [they] all have a great positive attitude, so I don’t think it will be too hard for us to transition.”
Head coach of the freshmen football team Matt Hochstrasser said he approves of Strickland’s arrival.
“He’s very qualified and he’s a great coach,” Hochstrasser said.
After the meeting in the cafeteria, Strickland exchanged his contact information with the football players and they all went up to shake his hand.
“I really like him,” sophomore and football player Alberto Calderon said. “He seems very dedicated to the sport of football.”
The football team has not won a regional playoff game since the 2007-08 season. Calderon said his ambitions are high and he hopes to win a playoff game during his time in the football program.
“I hope we achieve at least [a] playoff win,” Calderon said. “Honestly, I want us to go undefeated this year.” 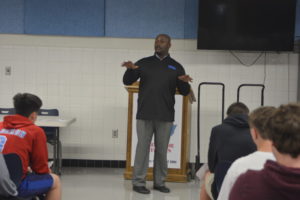