Ontrack for the Future

By: Sophie Tedesco
In: InDepth

Rank&File examines the FCPSOn
initiative, which will provide every high schooler with a personal laptop

Fairfax County Public Schools (FCPS) will give personal laptops to all high school students as a part of the FCPSOn initiative, beginning in the 2019-2020 school year.
Each student will be able to use the laptop at school and at home for the duration of the school year. Though schools will require students to turn their laptops in for maintenance and re-imaging over the summer, they will use the same computer for all of high school. Additionally, the county will give students without internet access at home a portable wireless internet device.
“The county is going to be in a four year replacement cycle so every four years all of those laptops will be turned in and new laptops will arrive,” principal Jeff Litz said.
While FCPS will not require students to take the school-provided laptop, every student must pay a 50 dollar maintenance fee at the beginning of the school year. County officials expect the fee to generate about 2.2 million dollars in revenue.
“It is not a fee specifically for the laptop,” Litz said. “The fee is intended to be utilized to replace broken devices or replace parts on devices that are in disrepair. Students who are on free or reduced lunch will either have a reduced fee or no fee at all.”
The proposed budget for 2020 allots 4.3 million dollars for the implementation of FCPSOn. The money funds the laptops, additional county technology personnel and three years of professional development for teachers.
“The budget is a set of priorities and an investment,” Superintendent Scott Brabrand said. “We’re asking families to support it through the fee. We’re asking schools [because] we’ve taken some school dollars to contribute and we’re putting some [money] in the budget. We’re really asking schools, families and the central office to chip in to support this.”
Litz said every student will receive a brand new Dell laptop. The county will then redistribute Marshall’s old laptops to middle and elementary schools.
“Middle and particularly elementary schools don’t have the money high schools do to be able to put technology throughout their buildings,” Litz said. “This is going to get more laptops in their buildings.”
The county used grants from the state and some FCPS budget dollars to fund pilot FCPSOn programs in seven high schools before countywide implementation.
Johns Hopkins School of Education has been monitoring the impacts of the FCPSOn initiative in the Chantilly High School pyramid and will continue to conduct annual reviews as the county implements FCPSOn in all high schools.
According to John Hopkins’ FCPSOn Phase One Evaluation Report for year two, teachers reported almost daily use of the laptops as well as increased student engagement and diversified presentation of content. But, there was no conclusive evidence to show students’ content knowledge increased. Teachers also expressed concerns about the possibility for distraction the laptops could provide.
“We have seen some positive development around engagement,” Brabrand said. “Some people want to know if this is the silver bullet for increased SOL scores and we don’t have that data complete. I think there is some initial evidence that it helps, but the purpose of the technology is not to do better on an SOL test, it is to be better prepared for the workforce [with] skills that you need in order to be successful.”
Litz said the primary issue students faced at pilot schools was keeping the laptops charged.
“These batteries will last a whole day, but kids have to get in the habit of charging them every night when they go home,” Litz said.
As part of FCPSOn, the county is asking teachers to create lesson plans that integrate technology.
“We have been working this school year to help teachers in the area of professional development as we work to start to create high quality, blended learning environments,” Litz said. “The expectation isn’t that [students are] facing a laptop all day long every day.”
Litz said he expects to see more station-based lessons and individualized content thanks to various software programs in the future.
“I told my teachers this is like a three to five year project,” Litz said. “The kids aren’t going to show up in August and all of a sudden we are going to have all of these blended learning lessons, but I think […] we will see these laptops being used in more creative ways with various types of software.”
In looking to the future, Litz said the next county debate will center around expanding the FCPSOn initiative beyond high school.
“The next talk that will happen over the next year or two with the school board and county leadership is bringing [FCPSOn] down to middle school, which I think will probably happen in the near future,” Litz said. “Then the real talk is do you [implement] it in elementary school.” 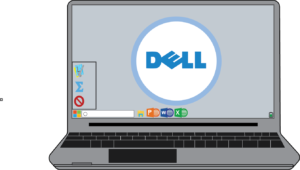