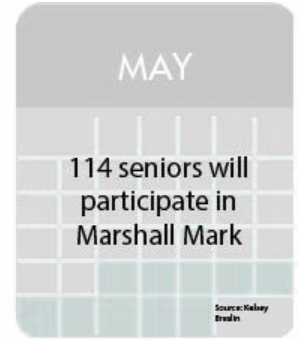 The English department will sponsor Marshall Mark for its second year running, in which seniors intern for businesses and various charities in the community.

Administration does not require seniors to do Marshall Mark, but English teacher Kelsey Breslin highly recommends her seniors to participate in it.

“I’ve recommended that all of my seniors do Marshall Mark because when we did it last year a lot of kids said that it was really beneficial since they were actually doing something,” Breslin said. “The reason they don’t want to come to class at the end of the year is because they’re not really doing that much in their classes, and they really want to be doing something else, so this sort of gives them that opportunity.”

English teacher Hendrick Booz leads the program and said that he supports seniors doing it who might want to do something differently with their time at the end of the school year.

“Frustratingly, [teachers] have been finding that fewer and fewer students are engaged in school because they have really tightening exams or SOL courses and stuff like that,” Booz said. “Ultimately, there doesn’t seem to be any sort of culmination to senior year in Fairfax County, whereas it’s required of Arlington County schools that they have a senior project, and others do an internship program. I felt like this would be a great final project for seniors.”

“I thought it would be a good chance to volunteer,” Sparrowgrove siad. “Since we don’t do much at the end of the year, I wanted to take advantage of it.”

Marshall Mark will occur from May 21 to Jun. 4.

“[Seniors] can do work, if they have a job,” Breslin said. “They can use their extra hours to get extra money. They can do an internship somewhere, or volunteer. If they have a freelance business, they can work with that. They can shadow a teacher. The can pretty much do anything that they couldn’t have done if they were in school for those last two weeks.”