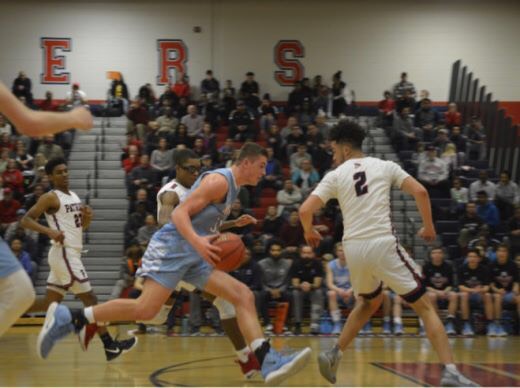 During his high school career, senior Daniel Deaver became the first basketball player to score over 1,000 points for boys basketball.

“I never thought I’d be able to be a 1,000 point scorer,” Deaver said. “It never really hit me until I finally did it and it was really overwhelming, especially being the first in Marshall history.”

Deaver said he never thought he would make varsity his sophomore year or even start until his senior year, let alone set a record that high.

“It really freaked me out when I first realized it was a possibility,” Deaver said. “I didn’t expect it at all. It was really humbling for me.”

Deaver said he had difficulty internalizing his accomplishment.

“It’s crazy,” Deaver said. “I don’t think it has sunk into my mind yet. It’s a tribute to the training, the amazing coaches and my supportive family that have gotten me to this point.”

Deaver suffered an injury that left him in a wheelchair during his freshman year. He said he had a treacherous sophomore season and did not score a substantial amount of points in his opinion.

“[Breaking 1,000 points] was extremely humbling and I’m thankful to everyone [who] supported me,” Deaver said. “Starting with my parents and coach Hale, along with my awesome teammates who trusted in me.”

Deaver said he hopes he had an impact on his peers and younger athletes. While he was on the team, Deaver also said he wanted to show future players that one does not need to fit into stereotypes people often associate with basketball.

“I never put sports ahead of being a nice person or helping others,” Deaver said. “I hope the new and future students follow that.”

Despite Deaver’s love of the game, he also struggled with balancing other areas of his life as well. Deaver said the main area basketball took away from was his grades and overall school performance.

“A lot of my teammates show how you can be a dedicated player and make good grades, [but] my [grade point average] has dropped from last year,” Deaver said. “I hope I can stay balanced and still be dedicated to the sport, [while having] fun.”