Unnecessary lockers lead to waste of space in halls

Home /Opinion/Unnecessary lockers lead to waste of space in halls 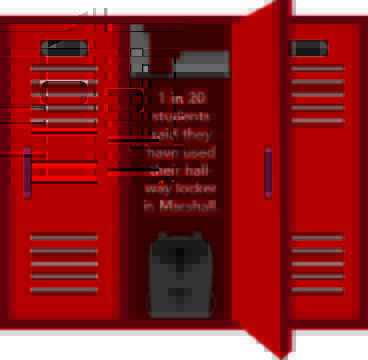 When rising freshmen first enter Marshall, they likely notice the abundance of lockers available in each hall of the school. While it may seem as though the large number of lockers are convenient for the school’s population, the only thing they do is occupy space in already crowded areas of the building.

Middle schoolers have to go to their lockers before every period, mainly because administrators do not allow them to carry backpacks to class, so it is beneficial to offer the freshmen lockers to facilitate their adjustment in a new environment.

But it is evident to see that even ninth graders grow out of their need for lockers almost immediately after arriving at high school.

Despite the availability of the lockers, most people choose not to use them as they are ineffective.

It is much easier to just carry around a backpack with all materials necessary including binders and folders, than to store them in a locker on the other side of the school.

Most of the lockers are in the most inconvenient places around the building.

The chances of even being able to open a locker in B-hall while a swarm of students walk by are slim to none.

Though they may add to the aesthetic of a school environment, having rows of lockers on each side of every hall in the building is entirely unnecessary.

The purpose of the lockers is to provide space for students to place things, but if anything they limit the available space because of their protruding shape.

They are 11.5 inches wide, meaning they extend approximately one foot from the doors of the classrooms to the hallway. This consumes valuable areas where students could be walking.

The cliché of students going to their lockers before and after class simply does not exist at Marshall since students bring their backpack to each class.

The school should recognize the lack of space in the hallways and remove the worthless lockers that fill up the building.